First full issue of Auric of the Great White North

In 1912, in a small mining town in Northern Ontario, Canada, a mysterious gas was unleashed from within the cavernous depths of a booming gold mine. Exposing all workers inside and countless others as it escaped to the outer northern atmosphere, the course of history changed forever.

On that tragic day, one brave man risked his life in an attempt to save others. That selfless hero fought through the pain and pulled several of his friends and coworkers out of the mine, and to what he assumed was safety. Despite his heroics, it was too late for them all. Many of the transformations were instantaneous but each and every one exposed, changed into evil beasts, cursed forever with the bodies and souls of monsters.

As our hero fell to the ground, writhing in pain and expecting his inevitable fate, something magical occurred. A Northern Goddess appeared and bestowed upon him the ability to control the beast inside. The Goddess also told Auric that it was his destiny to save the north from all the evil that was created that day.

Now it’s 2015 and it’s been a decade since Auric slayed the last beast and saved the North from it’s century-long battle against evil. But with the recent re-emergence of the monsters, our hero has returned to fight for his people. Now, in his golden years, Auric begins to assemble a new team and struggles to battle a new generation of monsters, all while dealing with the fact that he is no longer in his prime.

Is Auric losing the faith of the very people he dedicated his life to protect? And what will happen when a familiar face from Auric’s past makes an unexpected return to the public eye? 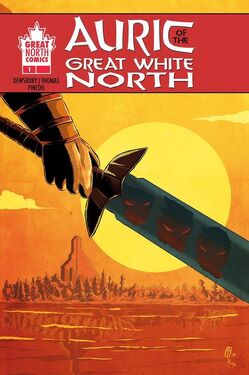 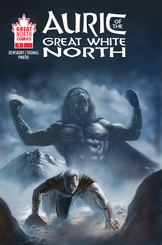 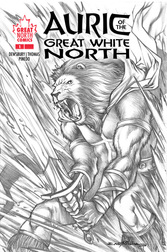 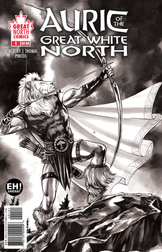 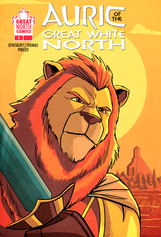 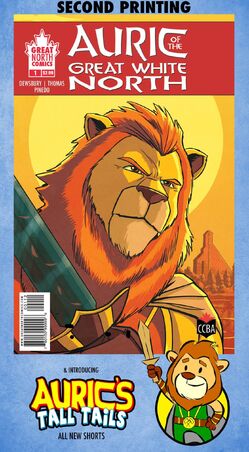 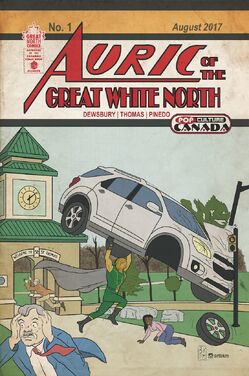 Brendan Montgomery St. Thomas variant
Add a photo to this gallery
Retrieved from "https://canadiancomicbooks.fandom.com/wiki/Auric_of_the_Great_White_North_Issue_1?oldid=2740"
Community content is available under CC-BY-SA unless otherwise noted.