A team of five student heroes from different faculties who fight together to defend Queen's University! Balancing school and activities is tough enough but try being a superhero!

Representing Engineering, Commerce, Arts, Science and Nursing; they come from a diverse background united to protect Queen's from the villains who seek to disrupt its splendor.

Their secret base is located below Stauffer Library for convenience. It is also useful as they can enter at all hours of the night without raising suspicions. Some of the librarians probably know of its existence but are cool with it.

All Characters were jointly created by members of the Queen's Comic Book Legion. 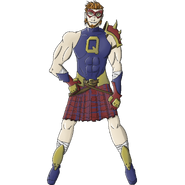 Decoder
Add a photo to this gallery

He is a great guy who is nice to everyone and very likeable. He is courageous and will do anything to help a friend. He is a brute who doesn't think things through and rushes into action too quickly. Very much a team player and encourages everyone to do their best. Has a strong sense of justice. Grew up in Kingston. Being quite frail as a boy he was given experimental drug to boost his strength. It worked too well, giving him super strength which was difficult to control. The drug also stunted his growth making him the shortest member of the team. The drug had severe side effects for most patients. After receiving his new lease on life, he wanted to give back so he went into nursing and helps people wherever he can.

He is a very disciplined individual who doesn't speak with unnecessary words. He is confident to the point of arrogance. He is good at recognizing patterns and thus makes for a good detective. His sharp mind and quick reflexes enable him to respond to situations quickly.He is an international student from China. He fights crime because he believes it is his destiny.He is not normally a team player but thanks to some convincing from Pecs he joined the team to do more good than he could alone.

She is beautiful outgoing social butterfly who is quite popular. She is very intelligent in the fields of biology, chemistry and minored in psychology. She has known success in all her efforts and thus is quite confident in her abilities. She can often be quite bossy and demanding since things almost always center around her. While seemingly shallow she loves her sister very much and does all she can to help her be as successful as she is.She is working as a graduate student in Biochemistry. She works in creating new biologically sourced drugs.  She is accidentally pricked by a thorn of a rare plant that has been irradiated. She then slowly developed the ability to manipulate plants. She used her ability to speed up her research and fight crime.

The sisters are from Vancouver. She has always been known as Persephone’s sister. Living under her shadow through high school. Artemis has always excelled at athletics but not so much at math and science. She has a great memory which helped her to major in history. She is training to go to the Olympics by the time she finishes university. Her relationship with her sister is complicated. While they love each other very much Artemis feels inferior because that’s how people have treated her even though she is great in her own right. That tension causes the occasional dispute between the sisters. They generally get along well but do like to tease each other.

He is a humble person, not very outgoing. He doesn't like to show off or try to prove he’s the best. He is a technical oriented person with a passion for technology. Not a risk taker. Likes to plan things out before going into action. Good at managing multiple things. Is an optimist especially when asked if something is possible. He believes anything is achievable with technology.From Ottawa originally. His father worked at a technology company there. In his first year at queen’s he was walking home from downtown through city park in front of the courthouse when he tripped on a rock which turned out to be a robot alien baby. The alien bonded with him and he calls him Chip. The alien gifted him the ability to communicate with machines by implanting a circuit in his brain. Chip helps him with anything he needs while they work on a way to send him back to where he came from. 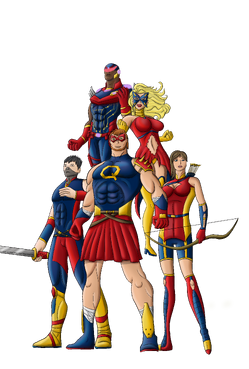 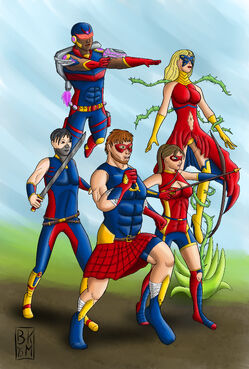 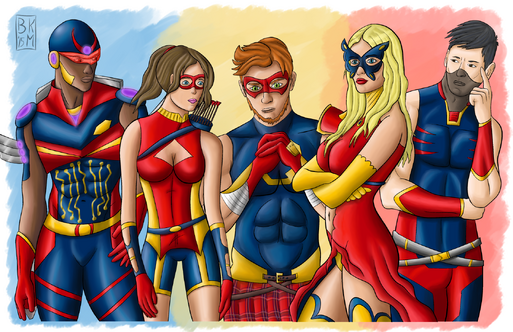 Add a photo to this gallery
Retrieved from "https://canadiancomicbooks.fandom.com/wiki/Gael_Force?oldid=449"
Community content is available under CC-BY-SA unless otherwise noted.