In NORTH, superheroes are more of an 'American thing.'

Canada hasn’t had active super-heroes or villains for decades. South of the border, the American dream mentality has manifested in larger than life heroes and villains centered mostly in major cities around the United States, while their humble cousins to the north had only a handful of masked heroes back in the eighties and that ended catastrophically... for all of them. Since then, masked good and evil in the north and the tragedy that resulted has become a part of our history... ‘best to keep things modest.’

Casey Van Allen, the offspring of the fallen legendary hero (Major Snow), has learned that the monster responsible for her father’s death (arch villain Lord Reign), is alive and well, living the good life after effectively staging his death years ago. Determined to follow in her father’s footsteps and to bring in the man who killed a national treasure, the young woman suits up and unearths a team of gifted misfits to help her in her mission.

With special abilities that combined should be enough to apprehend the now elderly Lord Reign, the Casey’s team bites of more than they can chew and accidentally awaken a beast that has laid dormant for the last thirty years. The well-intended group accidentally trigger the country’s second age of super-powered heroes and villains and only a mysterious flag-wearing mentor can keep them alive through the journey ahead.

All Characters were created by Scott Sawyer 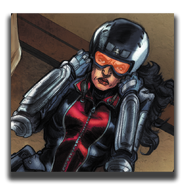 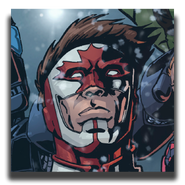 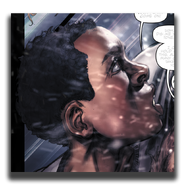 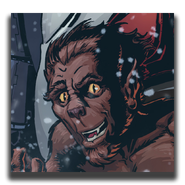 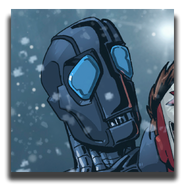 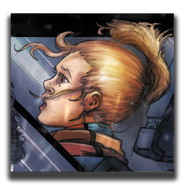 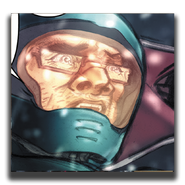 Alan
Add a photo to this gallery

- The strong-willed daughter of the legendary fallen hero Major Snow, Casey is the privileged and impetuous heir to her father’s fortune. She is the stubborn catalyst who puts the story of NORTH in motion and brings the patch-work team together.

- The mysterious flag-wearing hero and missing ingredient to the team.  He is the experience, the glue and the wisdom to counter Casey’s aggressive ignorance.

‘THE FIRE’ CHARLIE (aka ‘Charlene’)

-  The temperamental teenage powerhouse on the team whose misleading stature hides the strength of a behemoth.

- Recruited from a haunted house attraction for tourists in Niagara Falls, Ontario, Dean is a witty, proper werewolf whose silver tongue and sharp claws make him the best and worst part of your day. Dean considers himself ‘The Brad Pitt of the animal Kingdom.’

- An eight foot tall robot, the vessel for artificial intelligence, constructed by the now deceased boy genius. Acquired by Casey to her own ends, this powerful, precise, clumsy and oddly emotional, asset to the team is incapable of subtlety and loves repairing pianos.

- The youngest member of the team wrapped in a blanket and a force field that might just make her indestructible. Allie may be a mute but her actions will make her a legend.

- A janitor with a flight suit and the heart of a hero. ‘Nuff said… 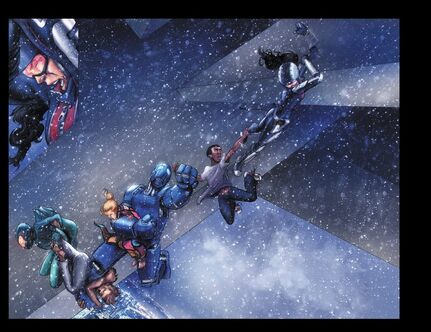 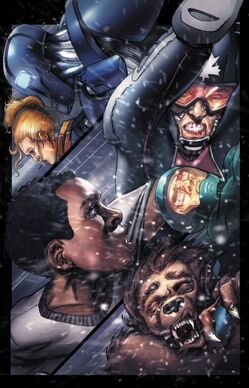 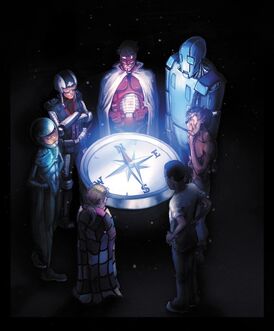 Add a photo to this gallery
Retrieved from "https://canadiancomicbooks.fandom.com/wiki/NORTH?oldid=1973"
Community content is available under CC-BY-SA unless otherwise noted.