In September of 2015, a biological terrorist attack was launched against the city of New York killing hundreds. Those who could afford to, left the city shortly after. In order to prevent another attack, the island of Manhattan was cut off from the rest of the city, and to a large extent, the country. Martial Law was declared in the city and troops were used to patrol the streets. The city’s outer boroughs were left to rot.

Later, a group called “Isis” was found to be behind the attack.

In November, during the hysteria and paranoia gripping the country after the attack, an ultra-Conservative candidate named Andrew Boyko won the Presidential election by vowing revenge for those killed in the attack and to protect the people at any cost. Shortly after he was inaugurated, President Boyko declared Martial Law across the country, named himself President-for-Life, shredded the Constitution and disbanded Congress.

The draft was reinstated and thousands of American troops streamed into Iraq. As retaliation, in June 2018 a nuclear bomb was detonated in Washington, D.C. by Isis backed terrorists, wiping out the vast majority of the city. The President survived, enlarging his image in the public eye. Shortly after, the city is abandoned and Staten Island is cleared to make way for a new capital.

The war quickly spread across the entire Middle East with Iraq, Syria, Libya and Lebanon territories and other Islamic countries allied against the United States-led N.A.T.O. nations. For the next thirty years the United States is in a constant state of war. While at home- with all able-bodied young people being sent overseas and most of our national resources being used for the war- the economy sinks into depression.

Crime spikes severely. Programs for the sick and poor are gutted to pay for the war. The United States is cut off from Middle East; oil and gas prices soar, further crippling the country. A black market for oil, along with other every day items springs up-run by smugglers and organized crime. A very small amount of people become exceedingly wealthy, able to profit off the war effort, while the rest of the country is left to starve. Education is replaced with propaganda and political indoctrination. Schools fall into disrepair and eventually the country ends up an illiterate, mindless mass bent on consumption and fame-seeking.

Intellectuals, artists and teachers began to protest against the war. They were quickly rounded up, arrested and thrown into detention centers where they were held indefinitely without charge or trial, thanks to President Boyko’s new secret police force and his constant use of surveillance on the American people. Resisters and rebels begin operating in secret. 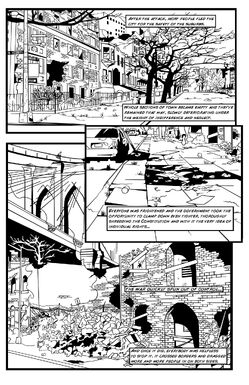 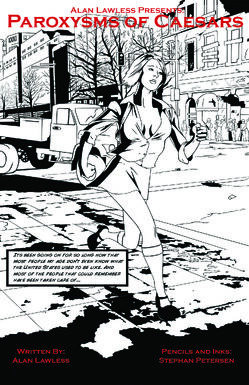 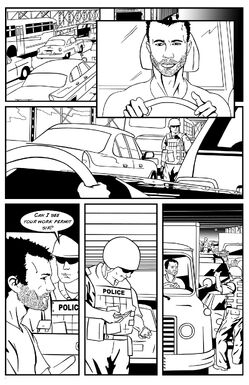 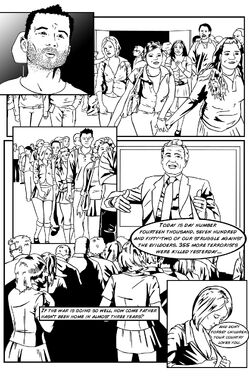 Add a photo to this gallery
Retrieved from "https://canadiancomicbooks.fandom.com/wiki/Paroxysms_of_Caesars?oldid=2641"
Community content is available under CC-BY-SA unless otherwise noted.