Written and Drawn by Jason Loo

Office clerk and struggling superhero Lucas Barrett goes on a date with someone he met online, who isn’t fond of his costumed alter-ego. Throw-in beetle vikings, his slacker friend the Majestic Rat, and cosmic villain Rabb the Malevolent (who has an awful resemblance to a former Toronto mayor that made headlines around the world), and you’ve got excitement! 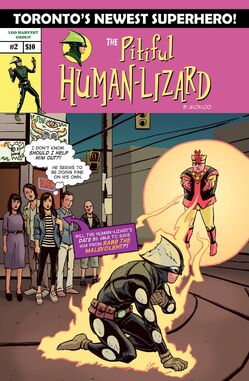 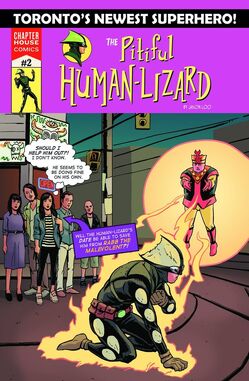 Chapterhouse Cover
Add a photo to this gallery
Retrieved from "https://canadiancomicbooks.fandom.com/wiki/The_Pitiful_Human_Lizard_Issue_2?oldid=718"
Community content is available under CC-BY-SA unless otherwise noted.