A team of four heroes from Kingston, Ontario who are not students at Queen's University but still lend a hand in keeping the Kingston area safe. Not nearly as well regarded by the community as Gael Force is. They may not be the best at what they do but their hearts are in the right place. Their diverse backgrounds are helpful in many situations.

Their home base is a hollow windmill on Corn Cob's family farm on Wolfe Island. It is a cozy place to hang when they have free time from their usual lives.

All Characters were jointly created by members of the Queen's Comic Book Legion. 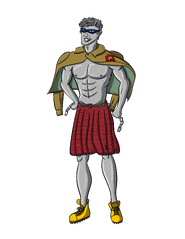 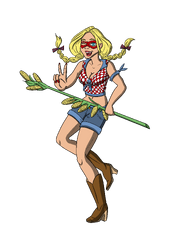 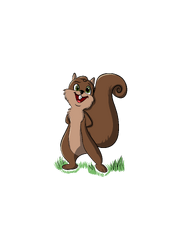 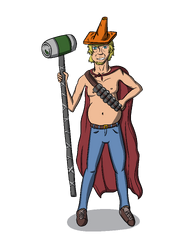 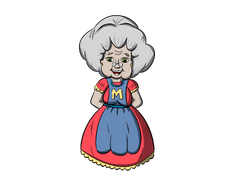 Ms. Muffin
Add a photo to this gallery

An alumni of Queen's Engineering who still makes him home in Kingston. Having the ability to turn his skin to steel and increase his strength to more than even Pecs of Gael Force, Iron ring is a force to be reckoned with. Unfortunately when in his steel form his movements are slowed down considerably and he is vulnerable to rusting from water. Named after the engineering tradition of the iron ring.

A simple farm girl from Wolfe Island, Corn Cob is both sweet and fierce. This beauty was granted amazing abilities by a magical corn spirit she encountered one day in her field. The corn spirit gave her the ability to manipulate corn to her will. She can launch exploding corn cobs and ride on a cloud of pop corn. Limited only by her imagination which unfortunately is quite simple. Her odd personality make her difficult to work with but she is a valuable member of the team.

Buttons is Corn Cob's sidekick. He is a cute companion with a dark past which is revealed in issue 3. While he can't speak or help in combat, he is so cute that she keeps him with her at all times.

first of his name, the Unbeaten, king of the Alfie's and the frosh men, Top Bro of the Great Ghetto, breaker of Kegstands and father of Heineken Hammers.

A drunken fool, Tallboy is the patron saint of house parties. He has never lost a drinking game and parties longer than anyone else. He sleeps for much of the day. His super ability is his dramatic increase in strength and speed when drunk. Unfortunately he still suffers from typical loss of vision and balance when highly intoxicated. Tallboy is a Queen's dropout but still hangs around the university district to continue to party. He affords his alcohol because he got lucky in the stock market while he was still a commerce student.

This sweet lady runs a bakery on Wolfe Island. After hearing about Corn Cob's miraculous gifts she encouraged her to use her powers for good which led to Corn Cob finding the rest of the Wolfe Pack and forming a team.

Miss Muffin's special ability is the magical sweets she can bake. They have strange properties which may be useful depending on the situation. She also keeps the group organized and focused when they need to be.

Retrieved from "https://canadiancomicbooks.fandom.com/wiki/Wolfe_Pack?oldid=450"
Community content is available under CC-BY-SA unless otherwise noted.